Safety of our all our members and visitors to Westfield Air Rifle Club is paramount – both on and off the range. The following page details safety considerations when visiting the club and general shooting rules.

Westfield Air Rifle Club requires all visitors and prospective members to undergo a safety induction prior to using our facilities.

Any air weapon brought to the club will be chronographed to ensure that it meets the legal requirements and the results of the test will be recorded.  Additional checks of member’s air weapons will also occur after maintenance and/or modification. Members are also encouraged to routinely chronograph their air weapons to monitor any changes.

A chronograph measures the muzzle velocity of the weapon, and from this value and the pellet’s mass, calculates the muzzle energy in foot pounds (ft-lb) or joules. Air rifles producing a muzzle energy greater than 12 ft-lb can only be held on a Firearm Certificate (FAC). For air pistols, this limit is 6 ft-lb.

Only non-FAC airguns are allowed at Westfield’s Range 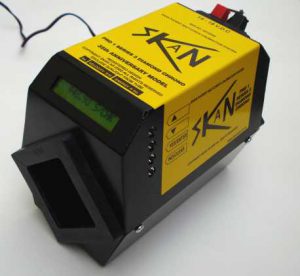 Above: New rifles will be discharged through a chronograph to ensure they meet legal requirements.

An air weapon can cause serious injury or even kill. Irresponsible use created a poor public perception of air weapons and resulted in their use being controlled in Scotland. We aim to change this perception by demonstrating that air weapon enthusiasts are responsible people, who enjoy their sport in an environment where the safety of the shooters and the public is paramount.

By following the common sense rules set out below, you can ensure that the air weapon is kept secure and used safely, and significantly reduce the risk of an accident.

ALWAYS treat an air weapon as though it were loaded.

ALWAYS keep your finger off the trigger until ready to shoot.

ALWAYS point an air weapon in a safe direction, preferably at the ground, and never at another person

ALWAYS keep the gun unloaded until ready to use –

Never fire an air weapon unless you are certain that the shot will be safe. This means checking that there is nothing and no one nearby who might be endangered by the shot and ensuring that there is a suitable backstop or pellet catcher to prevent ricochets.

Never rely on a safety catch to make an air weapon safe. Such devices can fail.

Never put a loaded air weapon down. Always safely discharge or unload and uncock it first.

Never store a loaded air weapon.  Air weapons should be stored out of sight and separately from pellets.

Air weapons should be covered, for example in a gun slip, when being transported.

Air weapons must not be stored where unauthorised people, particularly young people under the age of 18, might gain access to them. For example, use a lockable cupboard and keep the keys secure. Air weapons should be stored inside a house rather than in an outbuilding, such as a garden shed.

Consider ways of rendering a stored air weapon incapable of being fired, such as using a trigger locking device.