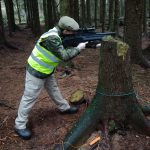 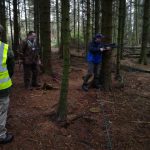 Down on the HFT Range 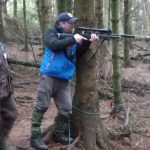 Using the tree as a steadying aid 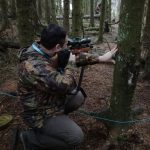 Taking aim down on the HFT range

Hunter Field Target (HFT) is a target shooting sport derived from the air gun disciplines of field target shooting and hunting. Primarily an outdoor sport shot with air rifles (rated at a maximum of 12 ft·lb), a typical HFT course is made up of 30 lanes, with each lane consisting of a peg and a metal “knock down” target placed in a position to simulate a hunting scenario. The peg marks the shooting spot and the shooter must touch the peg with part of his or her body or gun for the shot to count.

The targets are mainly based on typical quarry such as rabbit, rat, crow, and grey squirrel. There are also miniature tanks, aircraft, mythical creatures and shapes etc. They are made from metal and mimic their counterparts in both shape and size. Each target has a circular “kill zone” that varies in size, (typically 15–45 mm in diameter), and are set out at varying ranges (typically 8-45 yards/7.3-41.1 m). A direct hit to the “kill zone” triggers a mechanism that makes the target fall back flat, simulating a “kill”. Successfully “killing” a target rewards you with two points and the target is reset by pulling the cord attached to it. “Plating” a target (hitting the target anywhere but the “kill zone”) rewards you with one point. Missing the target altogether results in a zero, fondly referred to as a “Doughnut”.

The main skill in HFT (other than the actual shooting) is the ability to estimate the range to the target as accurately as possible. Ranging is either done using the traditional method of “visualising” the number of yards or metres separating you from the target, or by using a telescopic sight which uses some form of graduated reticle, such as “MiL Dot” or “Duplex”. The Field Target technique of “Dialling In” to measure the range, or the use of handheld rangefinders are not permitted. Once the shooter starts the course the scope may not be adjusted in any way, such as changing magnification, parallax, or turret settings.

When shooting, contestants may adopt one of three stances: prone (lying down), kneeling, and standing. Sometimes contestants will be forced to adopt a certain stance, for instance a lane that has “STANDING ONLY” sign must be shot in the standing position. If the shooter fails to follow this rule, the score for the target will be marked as a zero, even if it was “killed”.

Shooters from clubs all over the world participate in local and area competitions and also travel to national competitions held under the guidance and rules of the UKAHFT.